Last week I decided to google myself just for the heck of it. Low and behold, there I was on Amazon, with what they say is a page of my own. Clicking on that, I found that there were 7 copies of a book I had published in 1982, available from various book dealers, starting in price from $17.50 to $158.00.  Since then 1 book has sold and there are only 6 remaining.  In 1982 I sold those 59 page books for $6.95 plus shipping and handling and upped the price on the last two printings to $7.95.  I’ve written a rare book!  I AM a writer!  But this is something I never expected!

While living in Vermont, I raised my own sheep and agora goats so that I always had a good supply of luxurious natural fibers. Back in the early 80’s, shortly after having moved to Virginia, I began teaching the spinning of wool and mohair fibers into one-of-a-kind yarns to be used in knitting or weaving projects.  I also taught natural dying using local plants, like golden rod, pearly everlasting, walnut hulls, twigs and leaves.  These plants can yield lovely muted colors … soft, buttery yellows, gentle greens, occasional oranges and red depending on the plants and mordant used.  Walnut hulls give a lovely brown.

One year while showing my work at a local craft fair, I was approached by a woman who told me that her mother-in-law would be visiting for the summer from Australia. She did a craft called locker hooking, which I had never heard of.  She described to me a process of using fleece, right from the sheep’s back, to make sturdy rugs. It was difficult for me to envision the work from her description but waited with bated breath for Marj Boyes to arrive.

When we finally got together she showed me her beautiful rugs and a coat she had made for her daughter-in-law using the same technique.  She had learned it from John and Patricia Benson, neighbors in Victoria, who learned it from their son, Brian, who had seen it demonstrated in Ireland.

I had never known anything like it and fell in love with this new use for the bags of wool I had hauled with me from Vermont.  I arranged for her to do some teaching and the craft quickly caught on among locals interested in rug hooking and those who were raising sheep.  I made a number of rugs and vests myself and began to call myself a hooker! 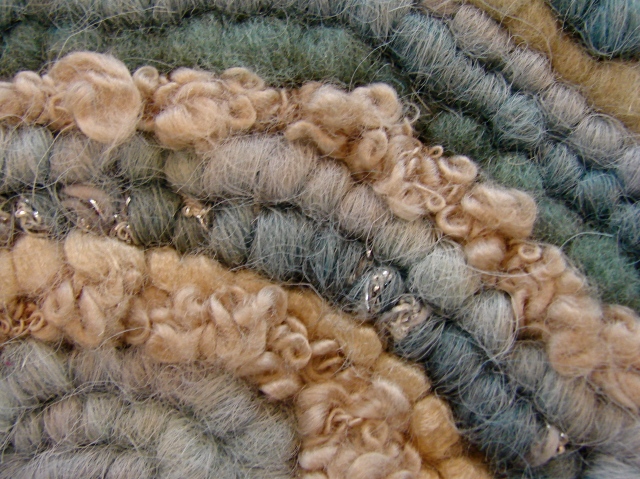 closeup of a small wall hanging

Just before Marj went back home to Australia, I told her that she needed to write a book on how to do this type of rug hooking. She said no, but why didn’t I do it?  Oh, my gosh!  Who me?  What do I know about writing a book and with two kids about to enter their teens, would I have the energy or the time to deal with anything else?  But the seed had been sewn and in a few months the idea began to sprout tiny green leaves somewhere in my brain.  I began doing some research trying to find the origin of this work and found a few mentions here and there, but it was sparse and mostly unknown.  I started writing what I knew and came up with a title:  Australian Locker Hooking, A New Approach to a Traditional Craft.

My husband became my editor.  We argued about grammar, spelling, but remained married and best friends.  My writing tools were an old electric typewriter and White Out, since home computers were not yet available. We designed the book together, he doing the photography and some of the drawings.  My children paced in the background feeling as though they’d been abandoned by both of their crazy parents.

We decided to include with the book a locker hook, which is the tool needed to do this craft.  Since they were not available in the USA, I found a manufacturer in England and imported them. We found a printer and we were off to the races. The finished book was in my hands in early 1982.

Because I was a spinner and weaver and subscribed to many weaving and spinning magazines, I knew my market well.  I ordered a printing of 3,000 books which I immediately began selling through inexpensive ads in national craft magazines.  I began writing articles, teaching classes and demonstrating whenever I had the opportunity. We went to Seattle to a conference of the Hand Weavers Guild of America where I began selling the books wholesale to spinning and weaving shops across the country and to a few shops in other countries.

In 1983 I reprinted another 2,000 copies and then again in 1985 and ‘86.  I was getting tired of being a mail order house and wanted to spread my wings into the field of nature photography. I contacted a number of publishers to see if they might like to take the project over, but they all declined saying that the trend wouldn’t last and that it was just too small a project to get involved with. I let the whole thing die a natural death giving several people permission to use some of my material knowing that they would be generous keepers of the craft.  I went on about my life, making photographs, paintings and exhibiting the results.

This is what I’ved learned:

Do your best. Believe in what you do. Release any attachment to outcome.  Stand tall. Count every blessing. Always say thank you. Check yourself out on Google once in a while … you never know what you’ll find!

This entry was posted in Books, stories, Vermont. Bookmark the permalink.