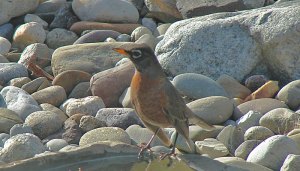 Dad is at work.  Mom has gone out for a while, leaving me in charge of my two brothers.  It’s a sun-drenched June morning. Tommy and Reid are outside playing in the sandbox with trucks and cranes. Suddenly they come running in yelling, “There’s a bird nest up in the oak tree. We think there are babies in it.”  By the time I get there, Tommy is half-way up the tree, eager to take a closer look at the tiny birds. They call in high-pitched cheeps as their mother circles above, a worm dangling from her beak.  With all of us looking up at her she doesn’t dare land on the nest. But her babies are ravenous for the worm-feast they know is on the way.

Tommy reaches the nest and reports that there are 3 baby birds in it.  Standing below, Reid and I want to see them too. But still a toddler, Reid can’t do the climb. I suggest that Tommy pick up one of the babies to show us.  He  does it, scrambling down the tree with a tiny ball of fluff tucked in one hand.

“What are you doing?” Mom, stands dumbstruck, watching as Tommy makes it back to the ground, handing her the tiny bird. Its head is bald with eyes shut tight, a few tiny pin feathers sprouting along the sides of the head where one imagines the ears might be. The rest of the round pink body is covered with downy feathers. The baby’s beak is open wide, waiting for a meal, unaware that he has suddenly entered the world of humans.

Mom tells us that we can not return “Robin” to his nest: his mother would abandon him, as he now carries the scent of humans. Mom is very mad at us. She calls us Nest Robbers. “Not only do I have three troublemaking kids to care for, but now a starving bird.”

But that is nothing new.  When it comes to animals of any kind, Mom has a heart about the size of the moon and will try to ease the suffering of any creature in need.  By the time we move from the house in Commack, we will have raised a litter of Daschund/Basset Hound puppies, three ducklings who would eventually die in the jaws of a neighbor’s dog, a crow named Henry, as well as a racoon, both of whom went back to living in the wild.

Robin would spend most of the summer in our kitchen.  His feathers grew in, and he loved to bathe and splash in a saucer of warm water.  We layed boards on the ground, under which worms, pill bugs and all sorts of insects gathered.  Perfect food for a growing bird!!  He learned to fly on his own from chair to chair, then across the room and into the next. We’d follow close behind with rags, scooping up his white, chalky poop.

Summer came to an end and it was clearly time to introduce him back into the wild. Mom explained that he needed to fly south with the rest of his kind to spend the winter in a warmer place.  When we opened a kitchen window, he flew out into the cedar tree that grew just outside.  If we closed the window, he’d peck at the glass and squawk, wanting to get back in. Eventually he took to exploring the yard and if we were outside he’d fly around us, landing on our shoulders.  While he was out exploring, we would leave a plate of food for him, along with a saucer of water on a shelf just outside the window. He always came back in the house for the night. 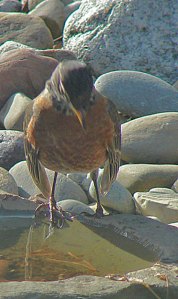 One day, after a heavy rain, Robin was nowhere to be found. Heartbroken, we searched and searched, sure that he’d finally flown off.  At the end of the day, I found him in a barrel of water, his wings extended to keep him afloat.  He was fine, but we dumped the barrel of water over so it wouldn’t happen again.

When school started in September, Robin was still hanging around, coming in at night, and depending on us for food.  One late September afternoon, I came home to find my mother in tears.  She told me that Robin was gone.  He hadn’t flown off with his wild kin, he had died.  Mom had been gathering worms for him from under one of the boards.  When she let the board drop back onto the ground, she didn’t realize that Robin had just landed next to her, gathering his own meal.

I still grieve the loss of that dear, innocent bird, but I learned important lessons as well. As an adult I know that a baby bird will not be abandoned by its parents even when handled by a human.  Keeping wild animals in one’s home is illegal. A license to do so is required. If one should find a baby bird on the ground, it should be returned to its nest quickly. If that isn’t possible a call to a wildlife center, like The Rockfish Wildlife Sanctuary, near Charlottesville, where the orphan will be raised with other birds and minimal human contact.  When it’s grown and found to be healthy, the bird will be  returned to the wild, close to where it was originally found.

I wrote this story especially for my brother, Tommy, who we now call Zed.  He recently sent me the photo below and when I asked if I could post it on my blog, he said I could if I would write a story about some of the pets and wild animals we had as kids. 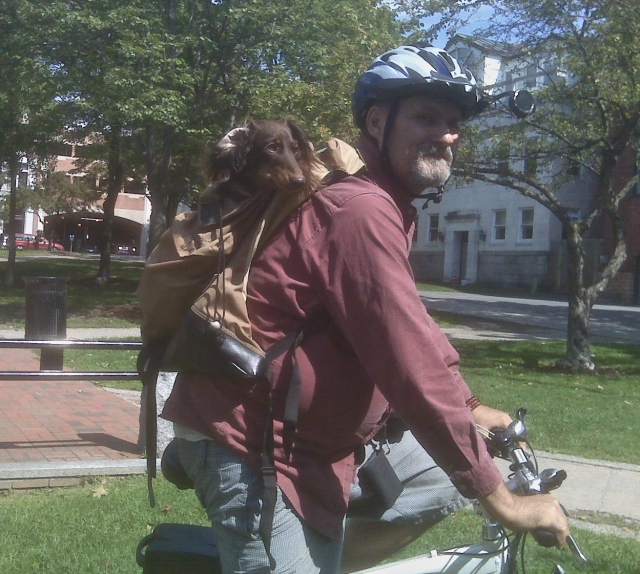 Zed with his beloved companion, Mousse, going for a bike ride!

This entry was posted in Uncategorized. Bookmark the permalink.